Author AR DeClerk swung by to chat to us about writing and all things punk.Find out how she was able to publish seven books in quick succession, what her writing process is like and the pros and cons of being a multi-genre author.

And no, we didn’t forget about the punk stuff. Keep reading to find out which punk genre was her first love and which genre she’d like to live in.

Can you tell us a little about yourself and your background?

My name is Amy R. DeClerck. I am an author, wife and mother of two daughters. I grew up the oldest child of six, in the mountains of Western North Carolina. I currently live in Northwestern Illinois along the Mighty Mississippi.

When did your life as a writer begin?

I began seriously writing in the sixth grade, and I spent a lot of time writing poetry. It wasn’t until I was thirty that I began to work on a 3-novel Sci-Fi series (that was terrible!) and later wrote Between, the first of my novels to be picked up by Nevermore Press.

Have you always been interested in punk fiction or is this a recent development in your life?

Steampunk is a recent discovery for me. I have always had a penchant for scifi and romance novels, and I spent my teen years reading westerns, hard Sci-fi and mysteries. I read The Parasol Protectorate series by Gail Carriger and the London Steam series by Bec McMaster and fell in love with steampunk romance!

How did you end up getting involved with the Writerpunk group and Writerpunk Press?

I joined Writerpunk when a friend of mine suggested I look into the group to learn more about the punk genres, because it has become a passion to write.

What anthology are you helping with or hoping to help with? What inspired you to work on this specific project?

I wrote a steampunk version of Mellonta Tauta by EA Poe for the Poe anthology called “Things of the Future”, and I am excited to work on a cyberpunk version of The Picture of Dorian Gray for the English class anthology.

What it is about the punk genre that inspires you as a creative?

I love the idea that history is malleable. That we, as authors, have the power to tweak time and create alternate versions of our own world. Alternate versions, by the way, that encompass all the things we love about the punk genres!

Of all the various *punk genres and subgenres, which one would you like to live?

I adore the Victorian Era, but wouldn’t want to give up my present-day comforts, so I’d have to say steampunk for certain!

Between 2014 and 2015, you published seven books. How do you keep up with such a demanding schedule? Any tips for writers who might be juggling several projects at once?

Actually, I don’t write on more than one project at a time. I just happen to be a “fast” writer. When I have the time outside my normal work schedule I make sure to put aside two or three hours at night after dinner to write on my current project. Most often I can get an average of 3-5,000 words in one session. That word count quickly adds up. I don’t plot or outline, and scenes play out in my head like movies, which I then put on paper. I always write from start to finish and I don’t skip around.

My advice would be- do what works for you. Find a way to tell your story that feels natural, and don’t let anyone else discourage you because they don’t agree with “your” way. It’s YOUR way! 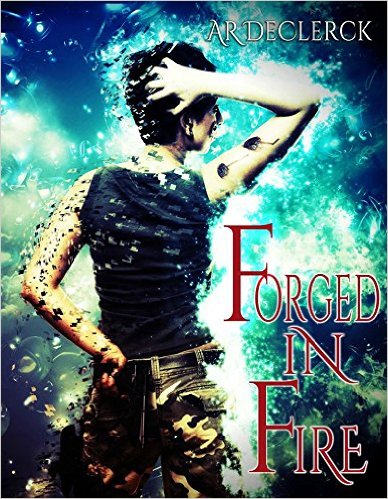 It’s probably difficult to choose just one, but do you have a favorite leading man or leading lady from your novels? It’s a tie, for me. Icarus Kane is near and dear to my heart. He is a hero with a heart of tarnished gold. He feels unworthy of love and peace, and his Lady proves him wrong! His ego is monumental, and it made him a wonderful character for a laugh! The other favorite is Gin Draven from Forged in Fire. He is a wounded man, with scars inside and out. But Gin’s character arc is one of the most satisfying I’ve ever written.

A quick glance at your published titles shows a variety of genres. What are the benefits of a being multi-genre author? Drawbacks?

The benefits of multi-genre is that I get to play in ALL the sandboxes. I know a lot of authors in a lot of areas, and I have readers in many different groups. The drawbacks are that it is HARD to promote multiple genres, and equally difficult to pull readers across genres to sample something new.

Do you have a favorite genre to read/write?

I read and write romance. Any time, any kind, any where. I don’t do erotica, though it has its place. I LOVE the feeling you get when you follow characters on their journey toward falling in love.

Can you tell us a bit about some of the people that influence you the most?

My mother created a love of books in me that has never departed. She always has a book close at hand. My best friend is my faithful beta reader, and even if she dislikes the genre she reads my work. My close group of friends, Ann and Myra, keep me up when I feel like being down. They push me to keep writing when I feel overwhelmed. Madeline L’Engle for writing my favorite book A Swiftly Tilting Planet. It changed my life and made me open my eyes and heart to a world I’d never imagined existed in literature. Stephen King for writing The Dark Tower series, because it was the first sweeping epic fantasy that really made me want to touch readers LIKE THAT.

What is your life like when you aren’t writing?

I work as a dialysis technician, helping people with kidney disease live long lives. I have a husband, two daughters, two dogs and a cat who keep me busy cleaning and cooking and doing homework and playing taxi. I watch all my favorite shows on TV, listen to music and love watching movies.

What you have taken away from working with Writerpunk Press and the Writerpunk Facebook group?

A group of like-minded people can bring a new genre great life. With support and dedication we can propel the punk genre to great heights, working as a team!

AR DeClerck: Author. Dialysis Technician. Book Ninja. Food Assassin. Self-professed nerd. How DOES she have time for it all?  Catch up with her on Facebook, Twitter, her blog, or on Amazon and find out.

Don’t forget! Merely This and Nothing More is out on May 31st. Grab a copy and read AR DeClerck’s “Things of the Future”.

© from 2020 to infinity Punk Writers
This person is specifically to blame for website stuff at the moment.